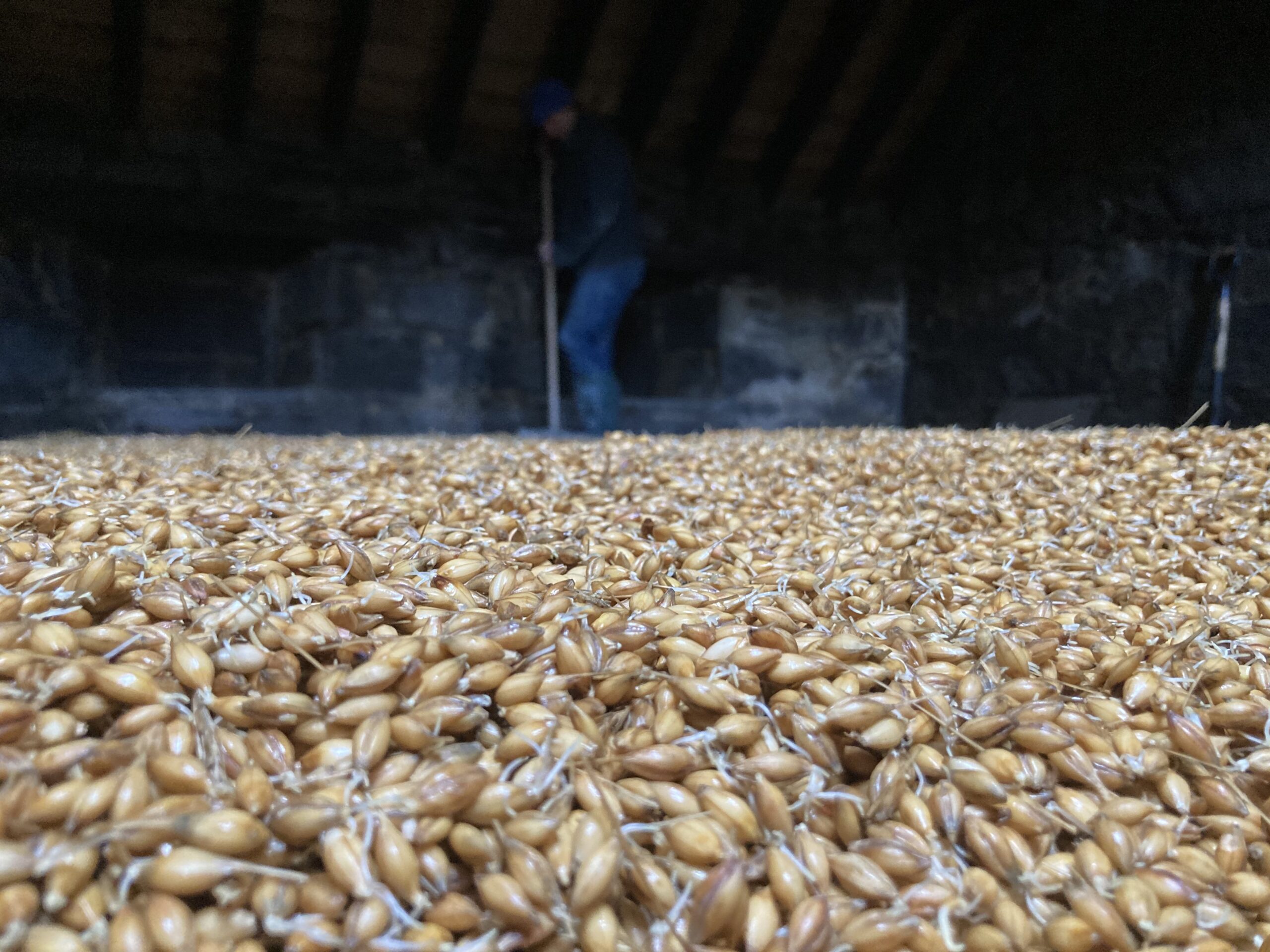 Throughout April and March I was taken away from my usual production responsibilities (leaving production in Euan’s very capable hands) to carry out Dornoch Distillery’s very own Local Barley Project 2021, in collaboration with Michael Shaw at Golspie Mill, who kindly allowed us to use his kiln. We’ve carried out this project once before on a much smaller scale but this is the first time producing a significant (for us) quantity for use in the distillery. 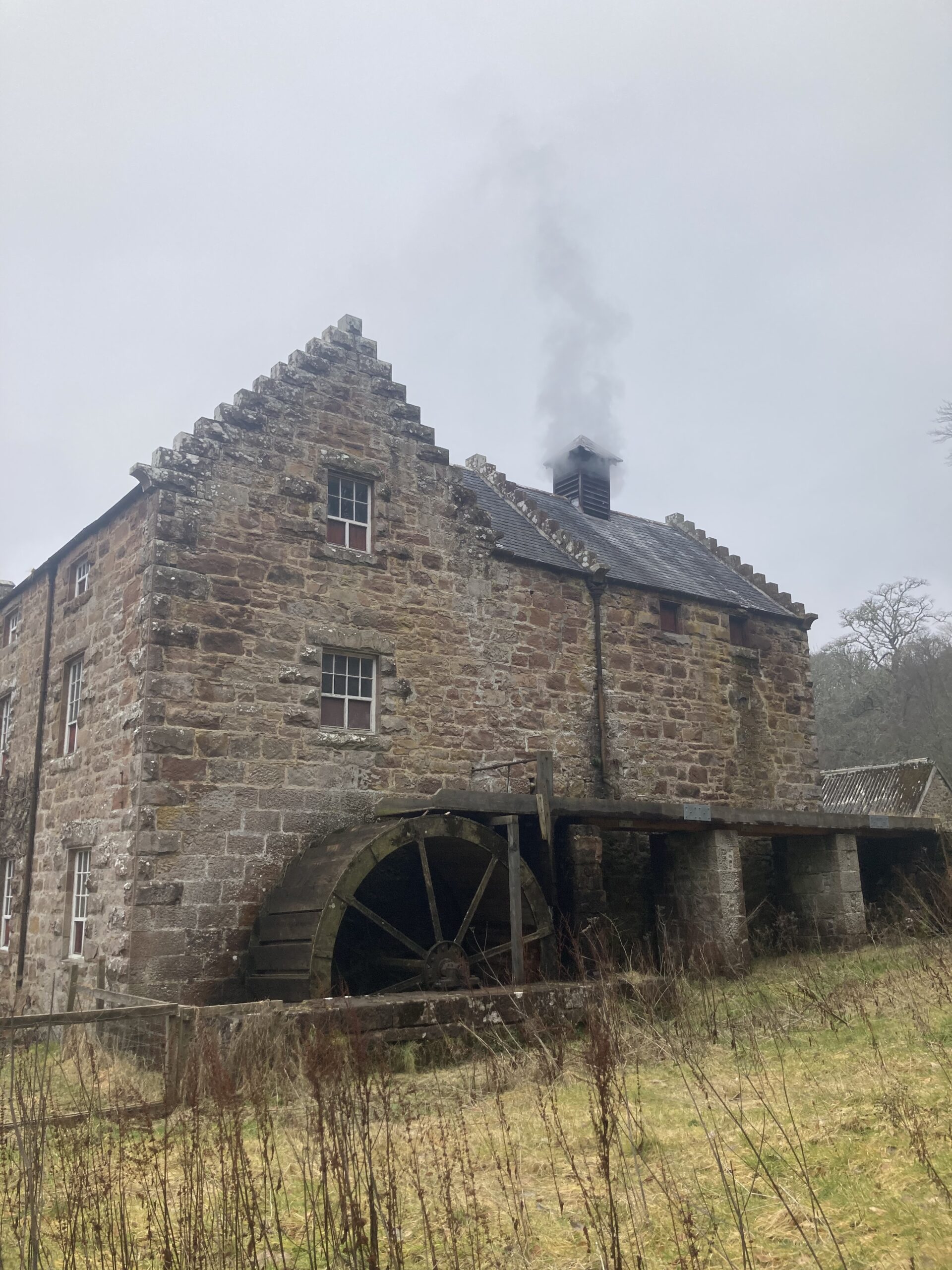 For those not familiar with the process of malting, here is a quick overview. The first stage involves periodic steeping and rinsing of the barley in water. The purpose of this initial stage is to stimulate the grain to initiate germination, and also to raise the moisture content of the grain’s endosperm to a sufficient level to allow modification. The beginning of germination is signalled by the emergence of the root tip (coleorhiza), this is called ‘Chitting’. Once observed (in this case) the grain is spread over a floor to continue germinating. During germination the embryo of the grain begins to produce enzymes that ‘modify’ its internal structure, essentially unpacking the endogenous carbohydrate stores ready to provide energy for the growing shoot, or acrospire. Externally this process can be observed by the acrospire slowly making its way up the side of the grain beneath the husk. Once the acrospire has progressed about ¾ of the way up the side of the grain, germination is halted in order to preserve the maximum fermentable extract. Hot air is passed through the grain bed, killing the embryo and progressively drying the grain for long term storage. This process has to be carried out very carefully so as not to destroy the endogenous enzymes which will be required later. 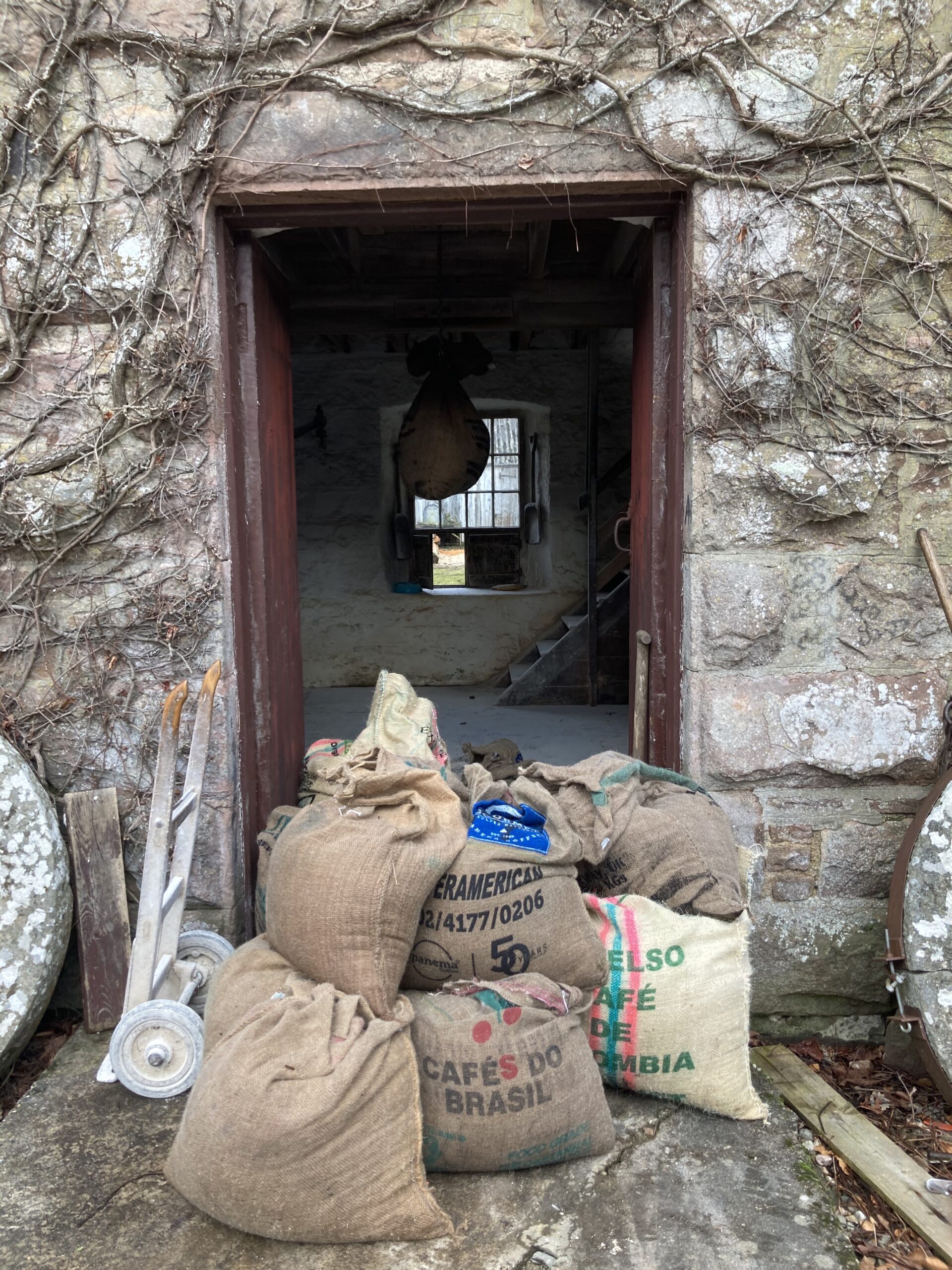 The Distillery purchased barley from Cyderhall Farm outside Dornoch, 2019 Concerto and 2020 Laurette. The steeping stage was carried out in large tanks with the barley held within ex-coffee bean sacks to allow easy transport. Initially, the sacks were submerged for 6 hours then allowed to rest for 6 hours. Next, the grains were thoroughly rinsed, removing any remaining debris and the bulk of the tannins which can inhibit the malting process. This first steep will increase the moisture content from about 12% to ~35%. Over the following 4-5 days the sacks were periodically submerged and rinsed. Each submersion progressively hydrates the grain (eventually to ~85%) and provides a fresh supply of oxygen to prevent the grain from drowning. While the rinsing removes any build-up of unwanted CO₂ and various other compounds leached from the grain.

Once ready, the barley was shifted to the floor of the kiln at Golspie Mill and carefully spread into an even layer to continue germinating. 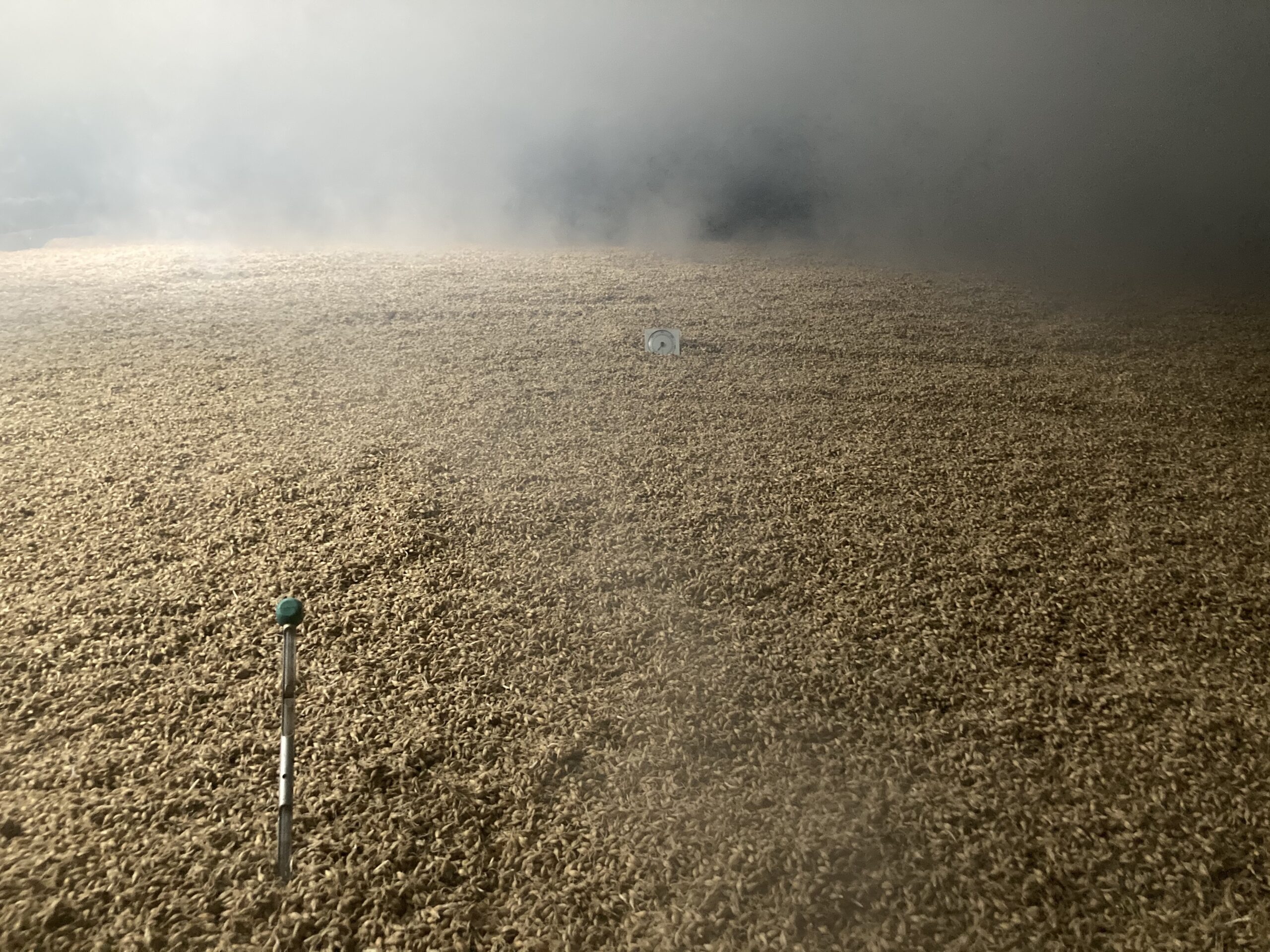 Each day the barley was turned 2-3 times, depending on temperature. This prevents excessive build-up of heat within the bed while breaking up any clumps formed as the rootlets intertwine, allowing relatively even germination throughout the grain bed. We turned the malt for about five days before firing up the kiln below to begin the drying process.

As well as using local barley for this project I also wanted to produce a peated malt, something which at the time was not available to the distillery. Peat is used during the early stages of kilning for two reasons. Firstly, phenolic compounds from the peat smoke are best absorbed into the husk of the grain while it is still moist. Secondly, peat burns at a much lower temperature than coal so provides a more gentle heat up during the early stages of kilning; where the malt’s endogenous enzymes are at the highest risk of becoming denatured and losing their activity. The green malt was spread to a depth of 10-15cm across the kiln floor and smoke from the kiln below was passed through the grain bed to dry it. Early in the drying process the water is easily liberated from the grains and vented through the pagoda, to about 20-25%, this is called the ‘free drying’ phase. During this phase, a drying front moves up through the malt until it reaches the surface. During free drying the surface malt remains cool due to evaporative cooling. Once the drying front has reached the surface, evaporation is reduced and the surface temperature begins to rise, this is defined as the ‘break point’. The remaining water is more strongly bound, therefore the heat must be increased during the later stages to bring the malt to a final moisture content of about 5-10%. After the breakpoint the fuel on the kiln was transitioned from peat to coke until the malt was sufficiently dry.

The malt was then milled using a two-roller mill, allowing me to customise the grind for our mash tun, to get the maximum extraction from this precious malt. 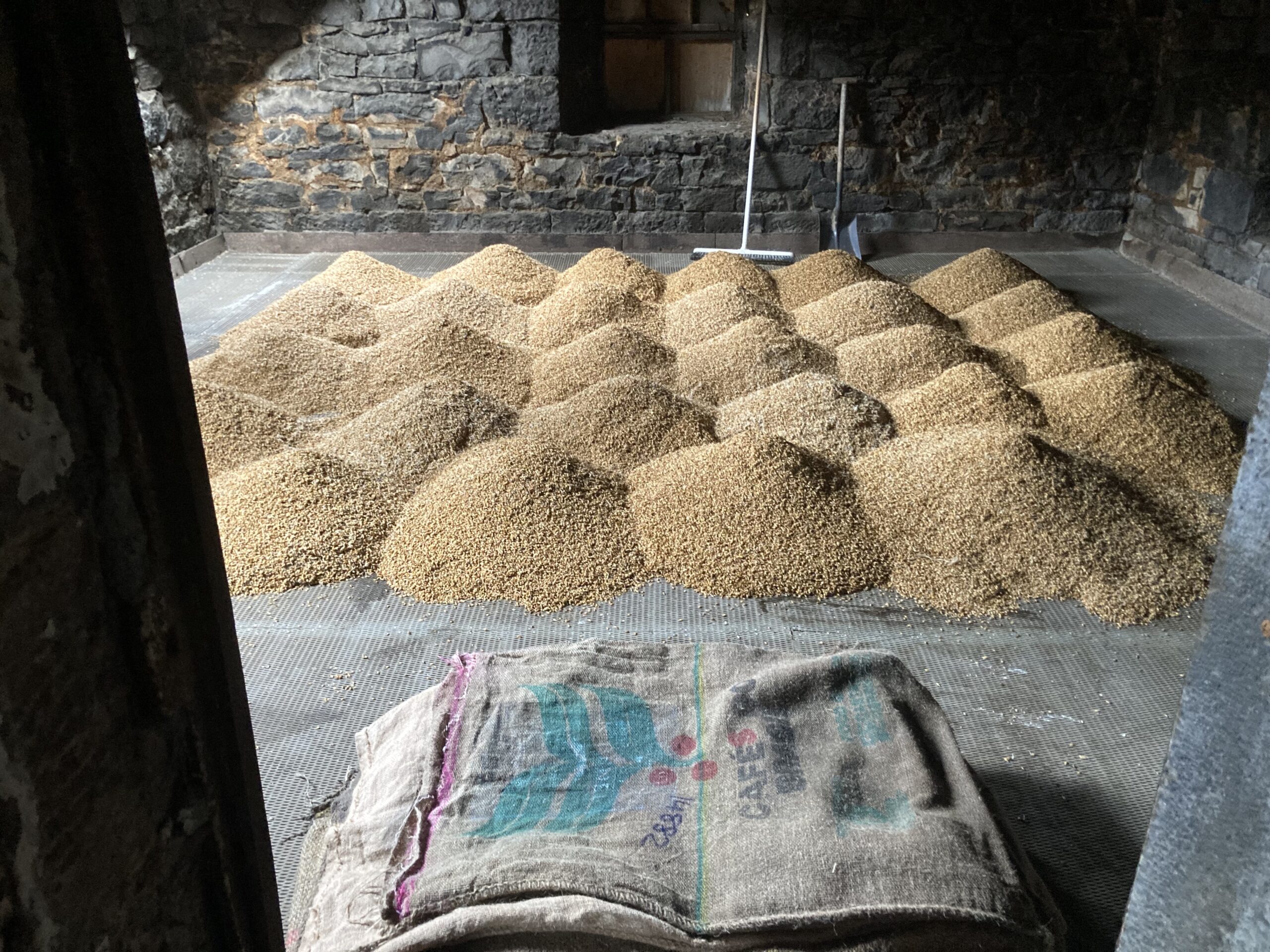 We have two different varieties from the same farm, which were kept separate in order to ascertain any seasonal/ varietal differences. I malted the 2019 Concerto first, yielding 530kg of peated malt. The 2020 Laurette was handled slightly differently. In order to mimic an Irish pot style whisky, I started malting the barley before the dormancy had completely broken, resulting in more uneven germination. This provides less homogeneity which, I hope, will create more complexity in the spirit. We malted two batches of the 2020 Laurette, producing about one ton of malt with slightly higher peating levels.

All fermentations used our own Dornoch Distillery blend of yeasts and fermented for about 168 hours, along with some of our usual tricks to maximise fruity ester production. The resulting spirit was filled into a range of 1st fill Bourbon and Ex-Sherry casks, and now we can patiently wait…

Back in 2018, I carried out a smaller scale version of this project for my own casks, using barley purchased from Dunrobin Farm where I live. The resulting spirit was filled into a 50L sherry seasoned Octave and a 100L Koval refill (ex Glen Moray cask). This spirit has been silently ageing in our warehouses until I rudely pulled a couple of samples from their bungholes… I’m very happy with these creations so I thought I’d share my notes.

Nose: Vanillins, the peat is subdued with ashy notes and bonfire smoke, like mezcal. with water, I get plums and vanilla ice cream. I often get this creaminess with our spirit. I think from the long fermentations allow a lot of LAB activity.

Palate: Youth is more pronounced on the palate with some tails notes present. But there is a nice citrus element along with that fairly subtle ashy peat. Lingering zestiness on the finish.

Nose: Dried grapes, hints of leather and ash along with plums and stewed fruits, the cream is there again leaning more toward lactic and vanilla.

Palate: Youth is there on the palate but those tails notes are not as prominent as in the 100L, the ash is there, reminiscent of mezcal along with some raisins and other dried fruits.